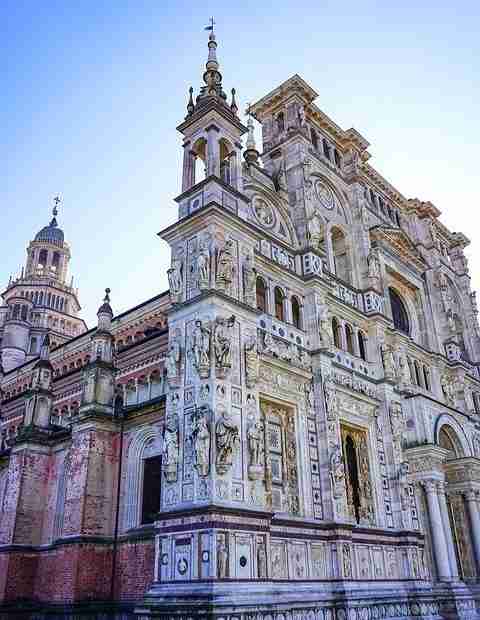 I already wrote about one of the towns I love most in Lombardy, Pavia. Well, a very few kilometers from there you can find a real jewel, one more: Certosa di Pavia. It is not only a church and a monastery. But it is a great example of the best religious architecture. It doesn’t matter if you are not Catholic or you don’t enter churches. Because in any case, you will be speechless in front of the art. I strongly recommend you to visit it if you are in Milan. You have to travel for less than 40 km. Passing by the highway or even via to local street (SP35). 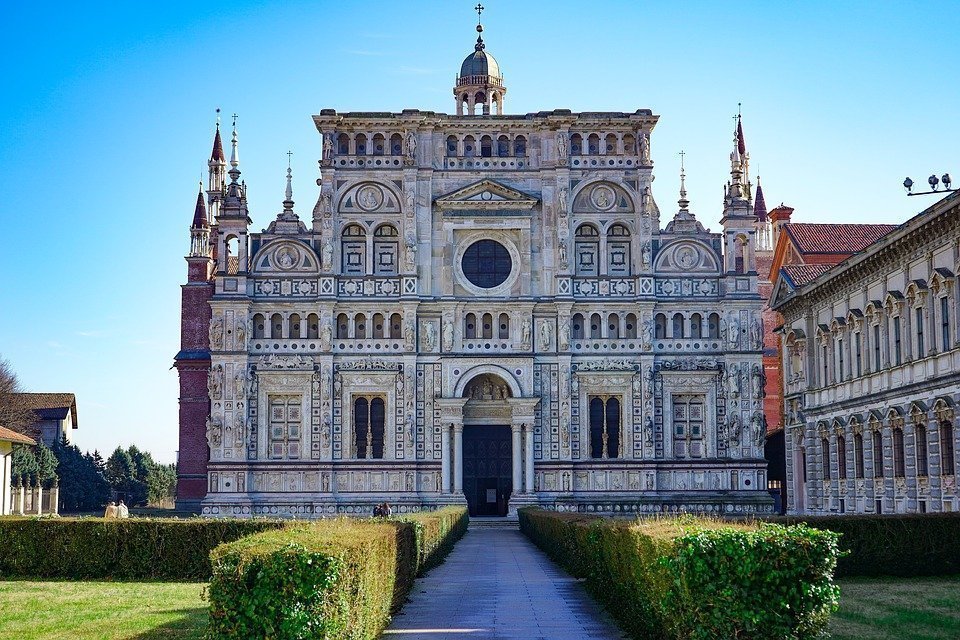 Frescoes and sculptures are everywhere. The Certosa di Pavia has a beautiful church. But it is really suggestive of the part with the cells and the cloister. Where friars sleep and pray. The visit is allowed in a huge part of the different areas. At the end of the tour is a good habit to leave a tip to friars. They use the money for the restoration. As they do with the money earned selling jams, herbs, and so on. The entire building is very well kept. Let’s see together the most important part of the attraction.

The first project of the Certosa di Pavia, with a Latin cross plan, bears the signature of Bernardo da Venezia. The same architect of the Duomo of Milan. Also, the customer was the same: Gian Galeazzo Visconti. The laying of the foundation stone in 1396, that of the last almost two centuries later. The count will never see his creature created: he died in 1402 and he is buried inside it. 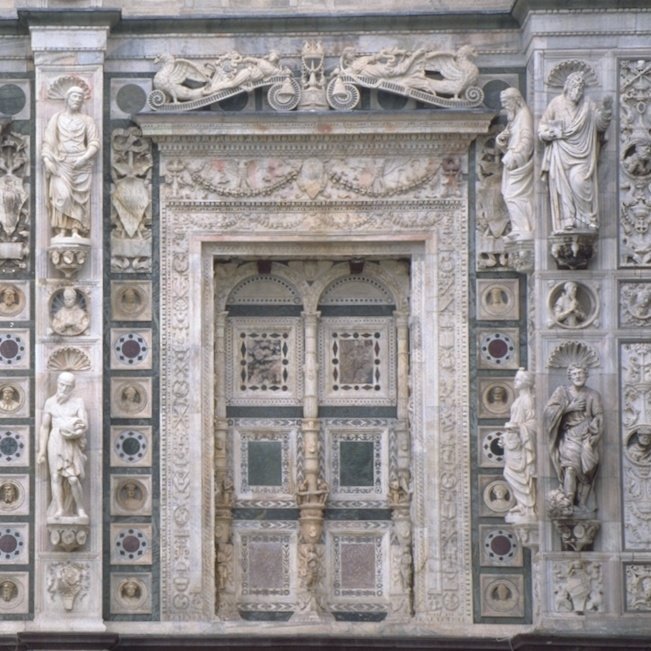 Since the early stages of its life, the Certosa di Pavia was a monastery. It has hosted monks dedicated to prayer and work. After the Carthusians, Cistercians, and Carmelites, today the Cistercians are still involved in the management of the complex. They offer guided tours, they also do the sale of typical products and sacred articles. Their way of life is following the same rules of the past. Maybe that’s why to enter the place looks like to jump in the past.

Certosa di Pavia: what to see

It’s a Unesco Heritage, so you can really expect something wonderful. Let me tell you some more details about the art of Certosa di Pavia. A Renaissance-style vestibule leads to the church, with three naves accompanied by an apse and transept. Among the beautiful works of art of the Certosa di Pavia, frescoes and sculptures made by Bergognone and Mantegazza and immediately identifiable at first glance. 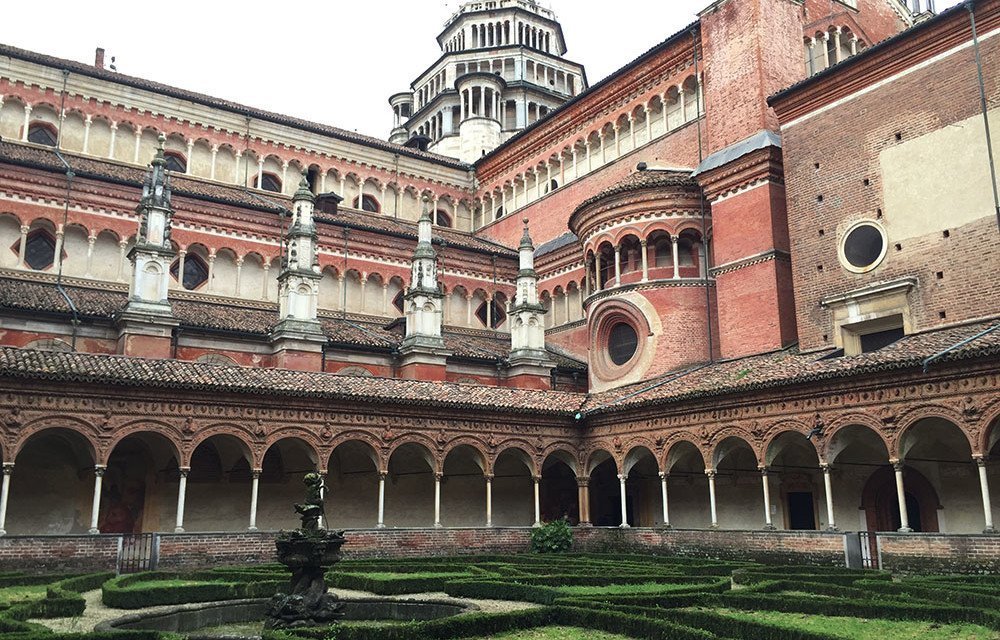 The façade was also beautiful, begun by Solari and completed by Briosco, the author of the portal. Clearly of Gothic origin, the upper part of the same was never completed and is richly decorated by the hand of Cristoforo Lombardo. To complete the complex they made two cloisters. This is what you can see outside, but there is more inside the monastery. 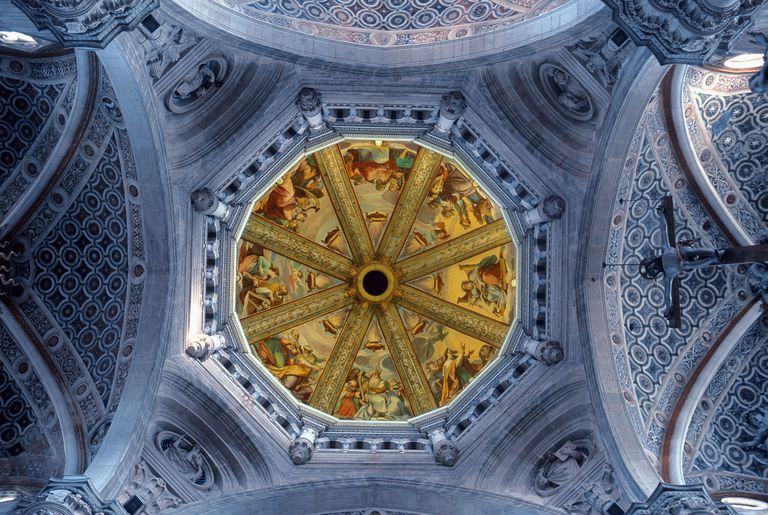 The Certosa di Pavia is a true concentration of paintings, frescoes and magnificent decorations. To see the polyptych by Perugino, the splendid figures on the walls of Guercino, Giovan Battista Carlone, Bergognone and Macrino d’Alba. The ivory triptych of Embriachi is splendid, signed by Baldassarre di Simone di Aliotto. In the presbytery, you can admire the frescoes by Crespi and Cerano, as well as in the transept, where the tomb of Gian Galeazzo is located. The tombs of Ludovico il Moro and Beatrice d’Este are also preserved in the Charterhouse. 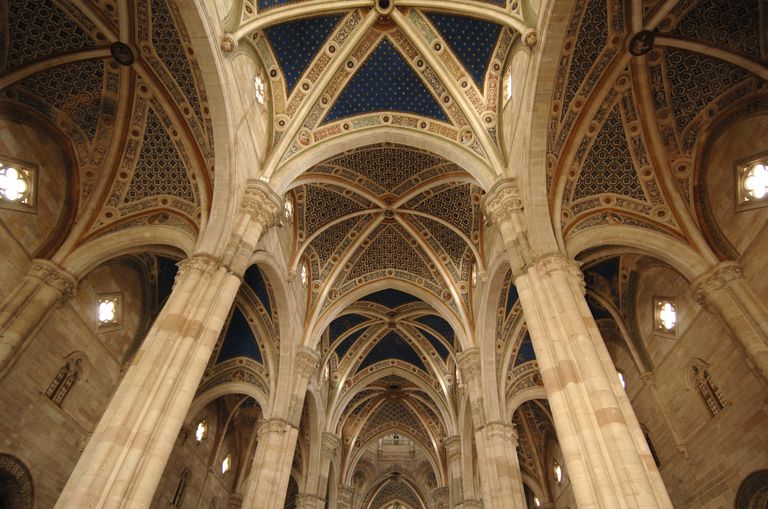 Then you can visit the museum. At the Certosa di Pavia, the artworks are also those exhibited in the rooms of the museum. The building is adjacent to the main body and set up in the halls of the Palazzo Ducale. You can visit the two sections available. The Gipsoteca is composed of more than 200 plaster casts, executed by Pietro and Edoardo Pierotti in various parts of the Certosa. On the upper floor, there are paintings and sculptures. Among which a splendid altarpiece of the Mountain stands out.

1. The facade of the church made of marble is a real museum of open-air sculptures. The realization of the decorations is dated between the end of the fifteenth and the beginning of the sixteenth century. It depicts mythological scenes and the history of Rome, among which medallions with the heads of emperors and kings, the reliefs with the scenes of the foundation of the Carthusian Order (Certosa de Grenoble), the episodes from the life of St. Ambrose and by Giovanni Battista. The upper part, on the other hand, is more recent, less lively and the decorations are limited to the architectural elements.

2. For the Gothic naves of the church and the side chapels – in one of which is the polyptych by Perugino and Bergognone. For the other works by Bergognone (eg “S. Siro between four saints”, “S. Ambrogio and four saints”, “Crucifixion”), for the stained glass windows and the imposing vault, inspired by the Milan Cathedral.

3. For the transept with beautiful frescoes (“Ecce Homo”, “Coronation of Mary with Francesco Sforza and Ludovico il Moro at his feet”, “Gian Galeazzo with his children presents the model of the Certosa to the Virgin”), with the funeral monument of Beatrice d’Este and Ludovico Sforza, known as il Moro (1497) left empty by the remains of the ducal copy and for the funeral monument of Gian Galeazzo Viscontiego (1492- 1497, 1562).

5. For the presbytery with the choir equipped with wonderful stalls and for the two marble thrones with very precious inlays, located on both sides of the altar.

6. For Luini’s fresco “Madonna with child” (ca. 1615), which decorates the washbasin room.

7. For the large cloister with the 24 cells intended for the monks. Each is marked with one of the letters of the alphabet, consists of three rooms and a garden, while in the entrance door there is a hole through which the monk received his daily meal.

8. To learn about the history and the severe canon of the Carthusian Order which has remained unchanged for almost 1000 years. The monastery in Certosa di Pavia was built especially for these friars, in the eighteenth century it passed first into the hands of the Cistercian Order and then to the Carmelites, in the mid-nineteenth century it returned to its original owners, but starting from 1968 the Cistercians reside there again.

9. For the possibility of cycling. The cycle path that leads from Milan to Pavia, along the Naviglio Pavese.

10. Due to the proximity of the naturalistic oasis of S. Alessio which is a park with particular fauna and flora. An underwater tunnel allows you to observe lake animals.

Certosa di Pavia, it is close to Milan, but it is closer to Pavia and I suggest you stay at least one or two days because there are many things to explore. You can choose a hotel and get there from Milan by train. I am sure you will like it. I saw not religious people remain speechless in front of this amazing architecture and art. It deserves a visit.