The castle in Milan: 1 amazing way to improve your tour in the city 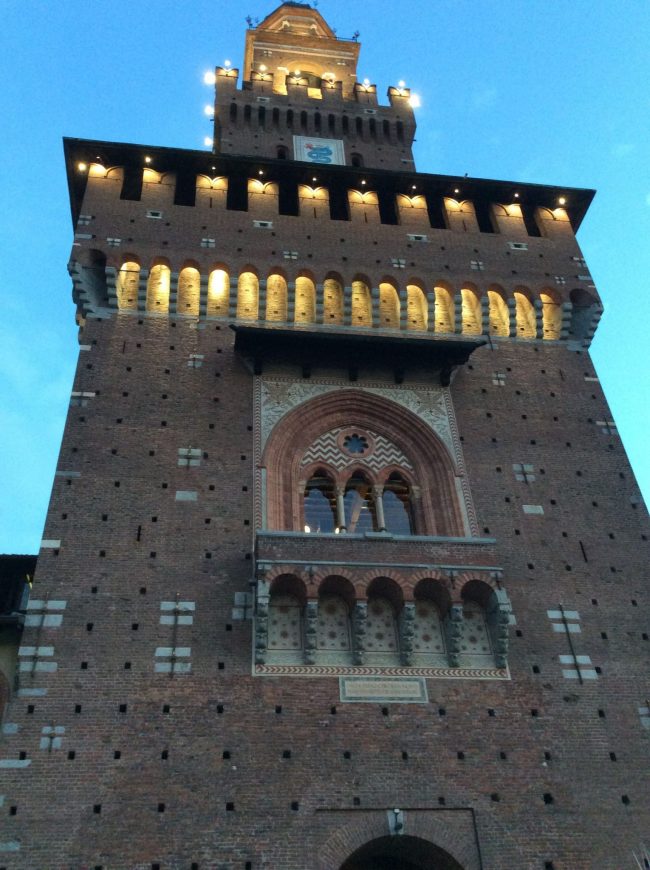 In many posts, I wrote about luxury experiences in the capital of Lombardy. It is surely a city I love. Now I want to write about the castle in Milan. It is one of the main attractions of the city, also if it is not well known by most of the travelers. Art, architecture, and history are mixed in the building, which tells a lot about the capital of Lombardy. The place is located not far from Duomo square. Starting from the cathedral you walk along Via Cordusio and Via Dante. It is 15-20 minutes away by foot. Otherwise, the underground takes you directly in front of the castle (two stops from Duomo). Well, now you have the directions, but why you should go there? Let me give you some information and impressions. 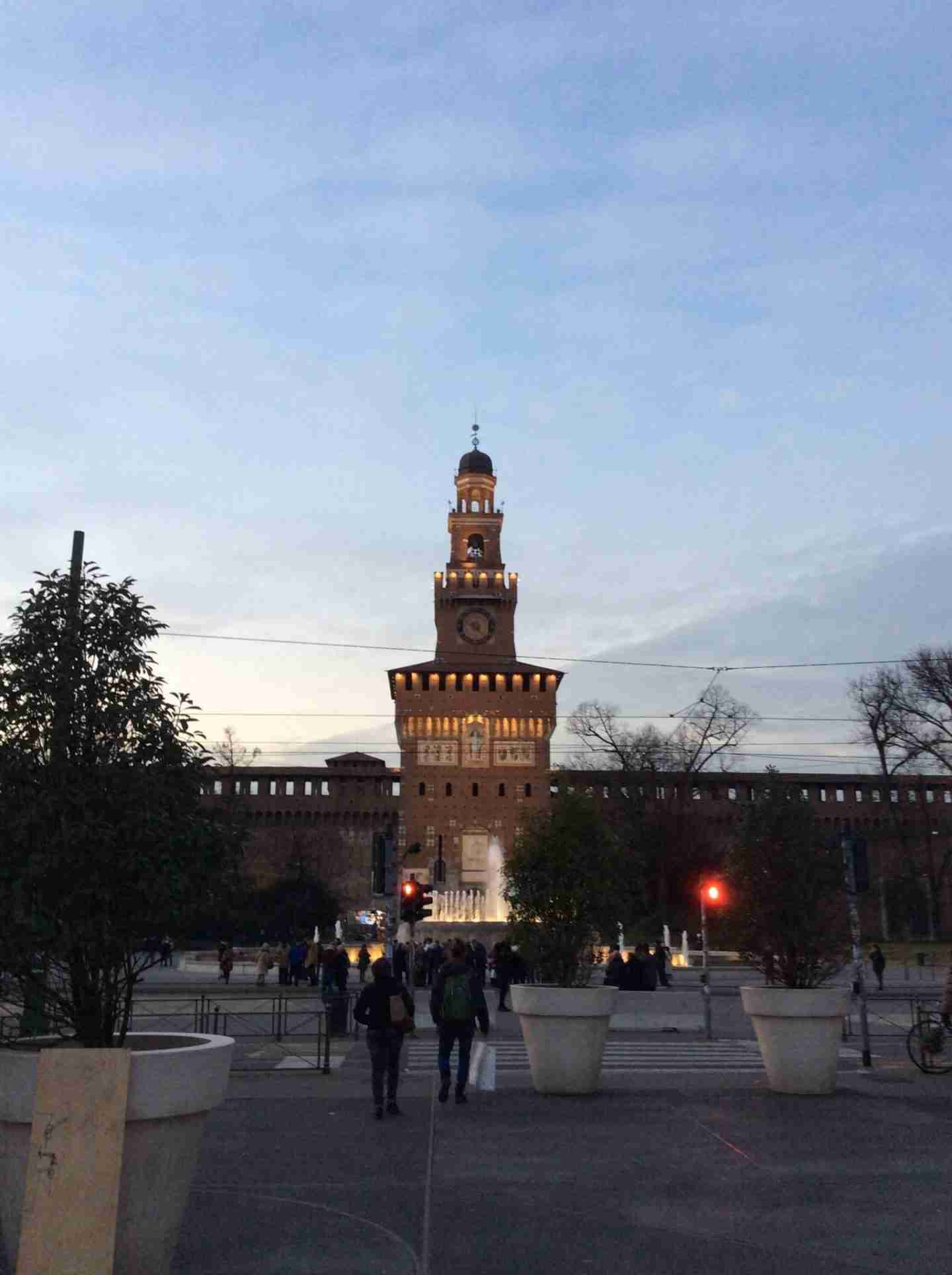 The castle in Milan: history

First of all the name: Castello Sforzesco. In English, we can translate it as Sforza Castle. Sforza was the name of the family who built it and owned it. Francesco Sforza, the Duke of Milan, commissioned the construction in the 15th century. The architect started to project on the remnants of a 14th-century fortification. During the next two centuries, the family enlarged the castle in Milan to obtain one of the largest citadels in Europe. The battles that happened in the different periods made some damages and for this reason, the entire complex was extensively rebuilt between 1891 and 1905. 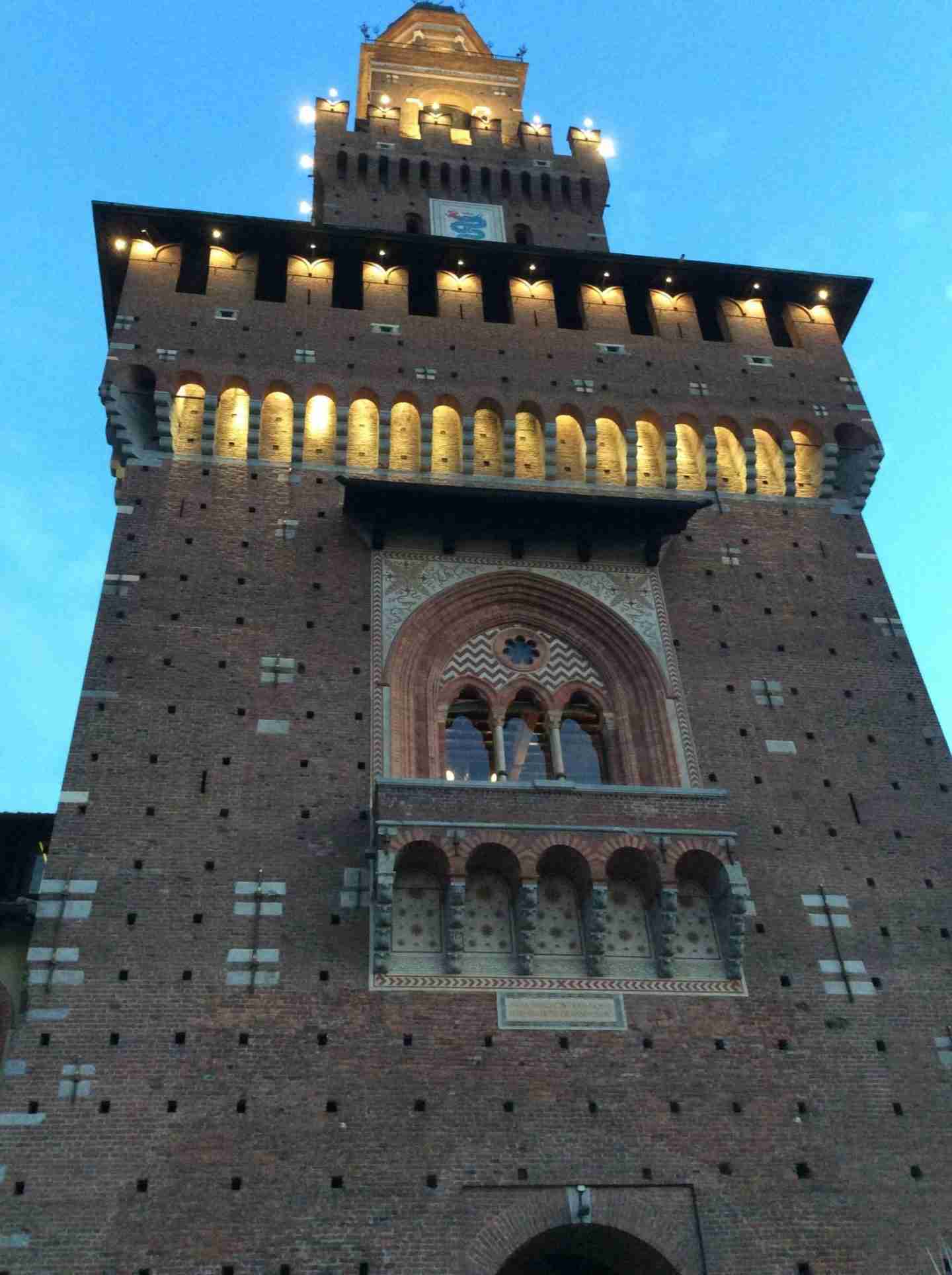 The first construction was made in the second part of the 14th century by Galeazzo II Visconti. It was a huge castle enlarged step by step, but it was almost all destroyed by the Golden Ambrosian Republic. Sforza wanted to recreate the structure as a symbol of its power. For this reason, they hired Filarete, an important sculptor and architect of his time. With a team of painters, after the construction of the walls, they decorated all the castle in Milan. Inside and outside.

The importance of the castle

Sforza Castle became a citadel during the Spanish domination. The governor established in the building his seat for a while before moving to the Ducal Palace. Thanks to its position, the castle in Milan was always the landmark for who ruled the city. Another reason to be the favorite place was also its size and the structure, well fortified. Inside it was possible to host a garrison made by 3,000 men. The fortification offered a lot of space, but also bastions to defend the building from the attacks. 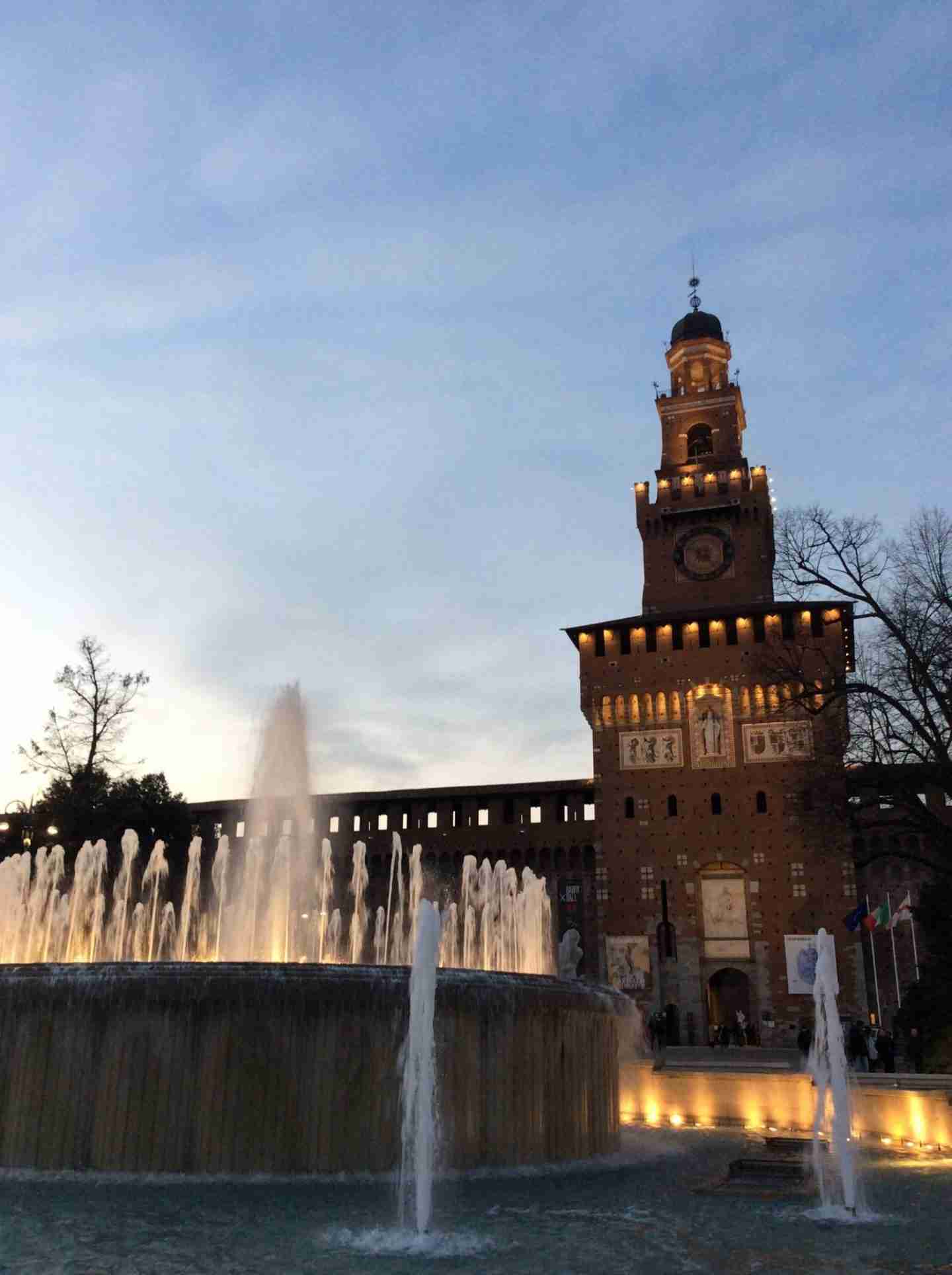 Some battles made damages, but between the end of the 19th century and the beginning of the 20th century, they realized the biggest restoration. Not only of the castle but also of the medieval streets around. In particular at that time was realized Via Dante, to create a direct connection between the Sforza Castle and the Duomo. Also after the Second World War, they rebuilt some parts, but all the time they respected the original Sforza architecture.

The architecture of the castle in Milan

The shape of the castle in Milan is really interesting. It is a hexagon, in the beginning, was a pentagon, with 12 bastions added. The length is about 3 km, meanwhile, the whole area is about 26 hectares. Entering the castle you can see a big courtyard called Piazza d’Armi. In some of the small open spaces, they realized some pools as decoration. Also, the facade shows a lot of different decors to remind the main steps of its history. Let’s see a bit more in detail. 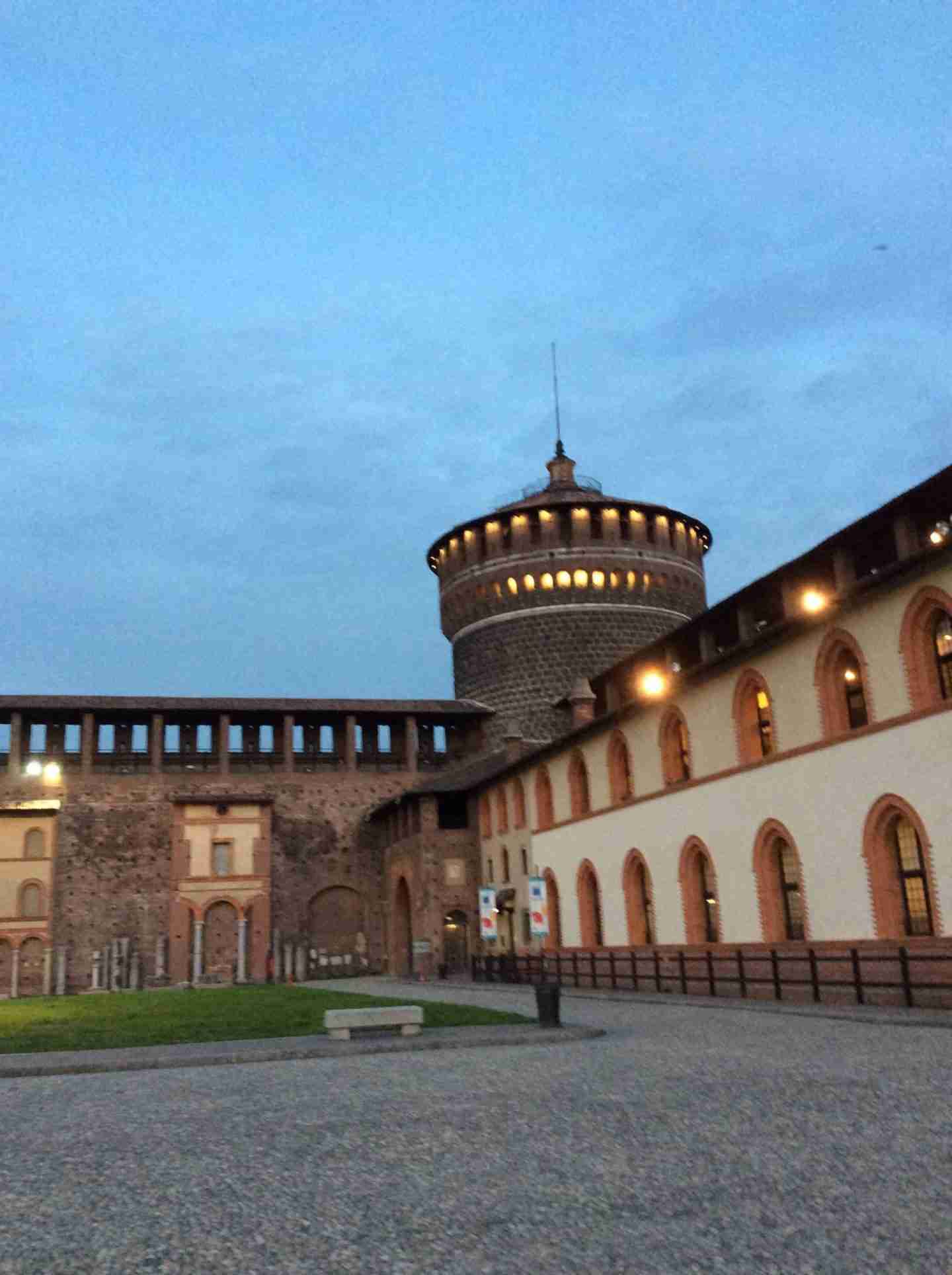 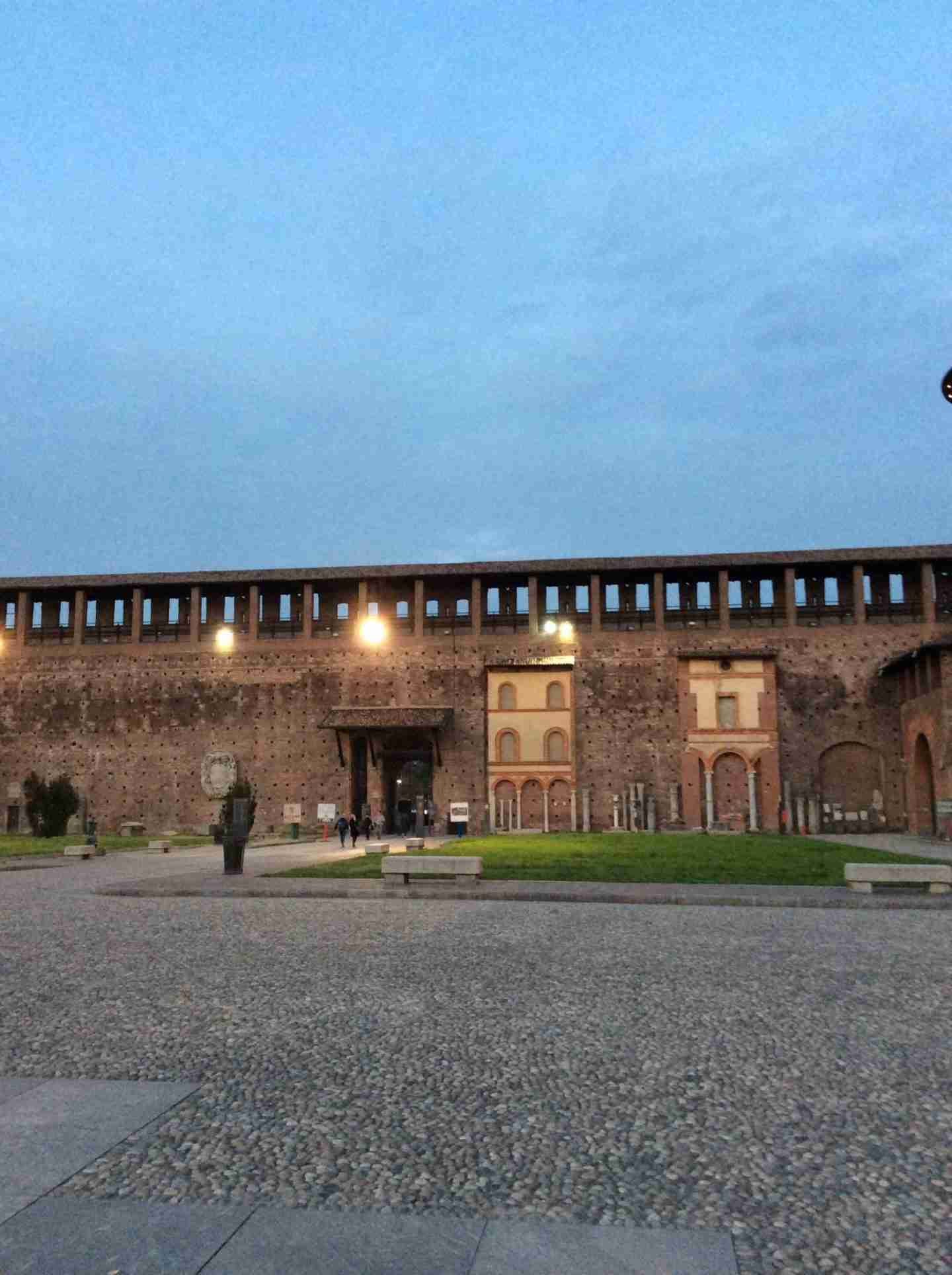 The plan of the castle, now visible, is quadrangular. It has square towers and an ogival gate. Each tower has a name coming mainly from the Sforza period. A huge park appears behind the complex. It is connected to the castle by a drawbridge. There are two entries: the main one is located in Piazza Castello with a fountain and the other one on the back to go to the park. The walls inside the courtyard have different paintings dedicated to the important people who stayed in the castle in Milan and about the most famous facts of the various periods. 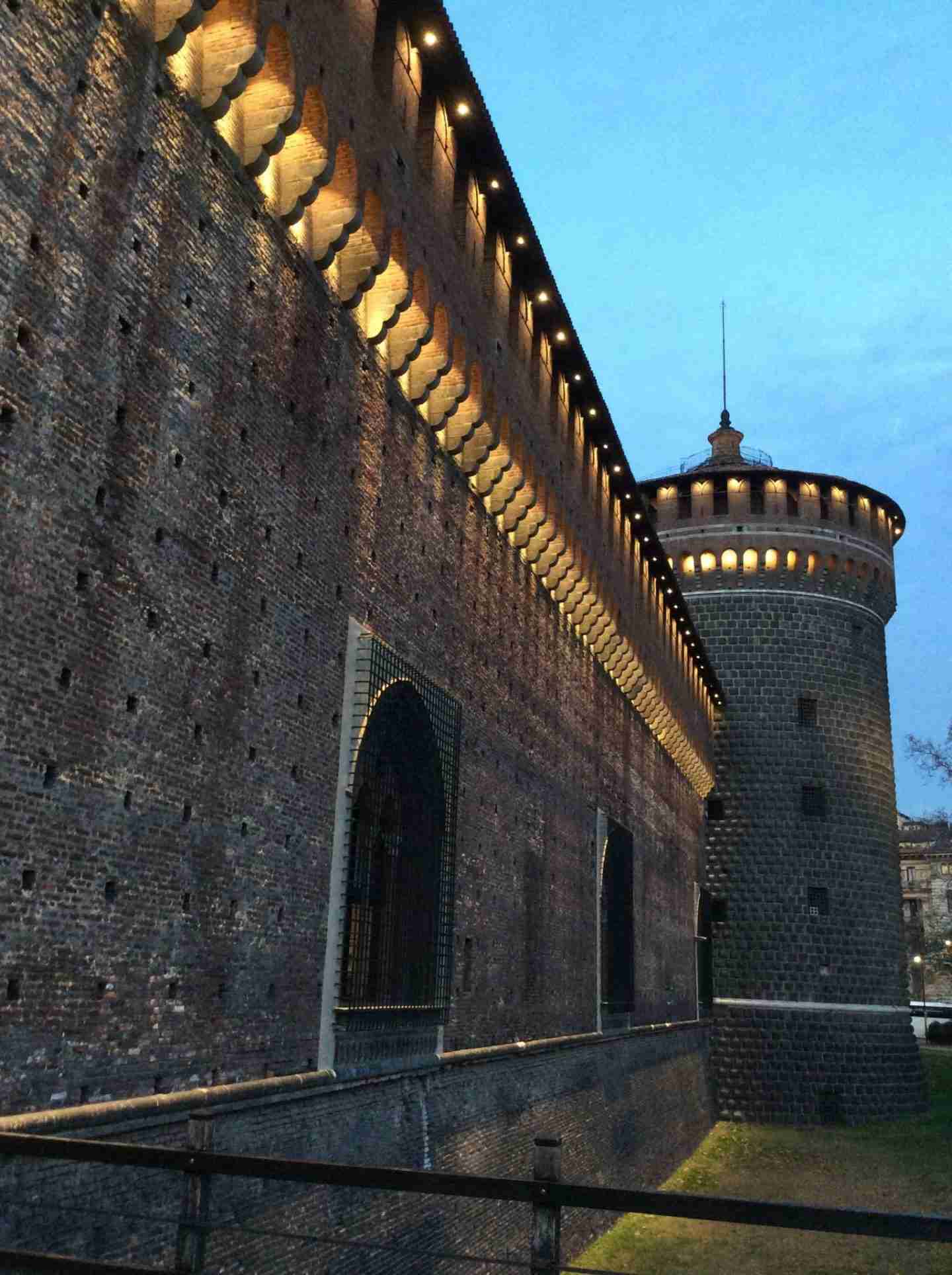 On the main entrance external side, you can see two round towers, as requested by Francesco Sforza to the architect who built the castle in Milan. In the 14th century, they built square towers, but the Duke decided to replace them. Because those type of towers is more efficient against fire weapons. The visitors generally stops in front of the main tower, because it is part of the entrance. They called it Torre del Filarete, in honor of the architect who made it. What you see today is a modern reconstruction. 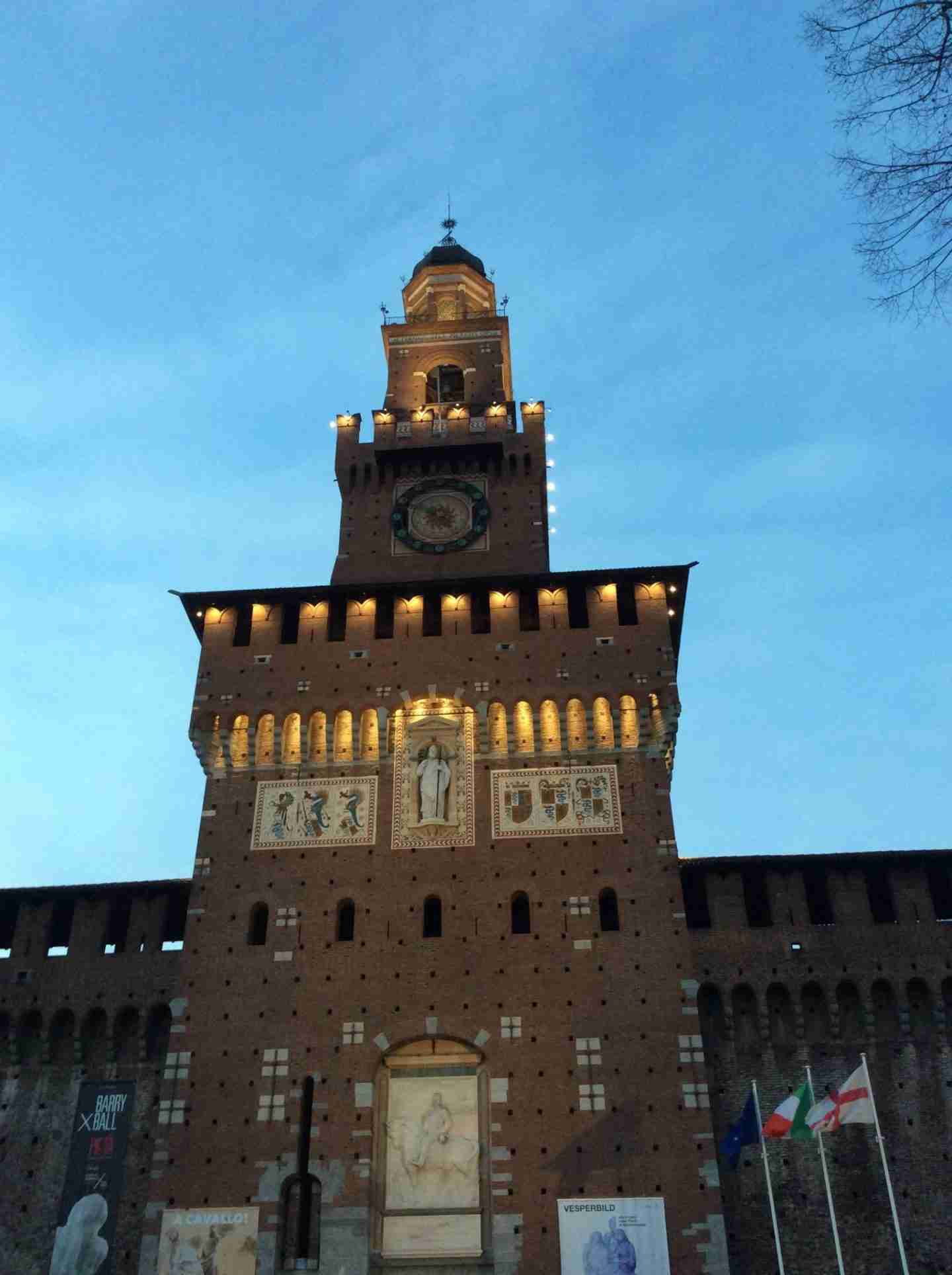 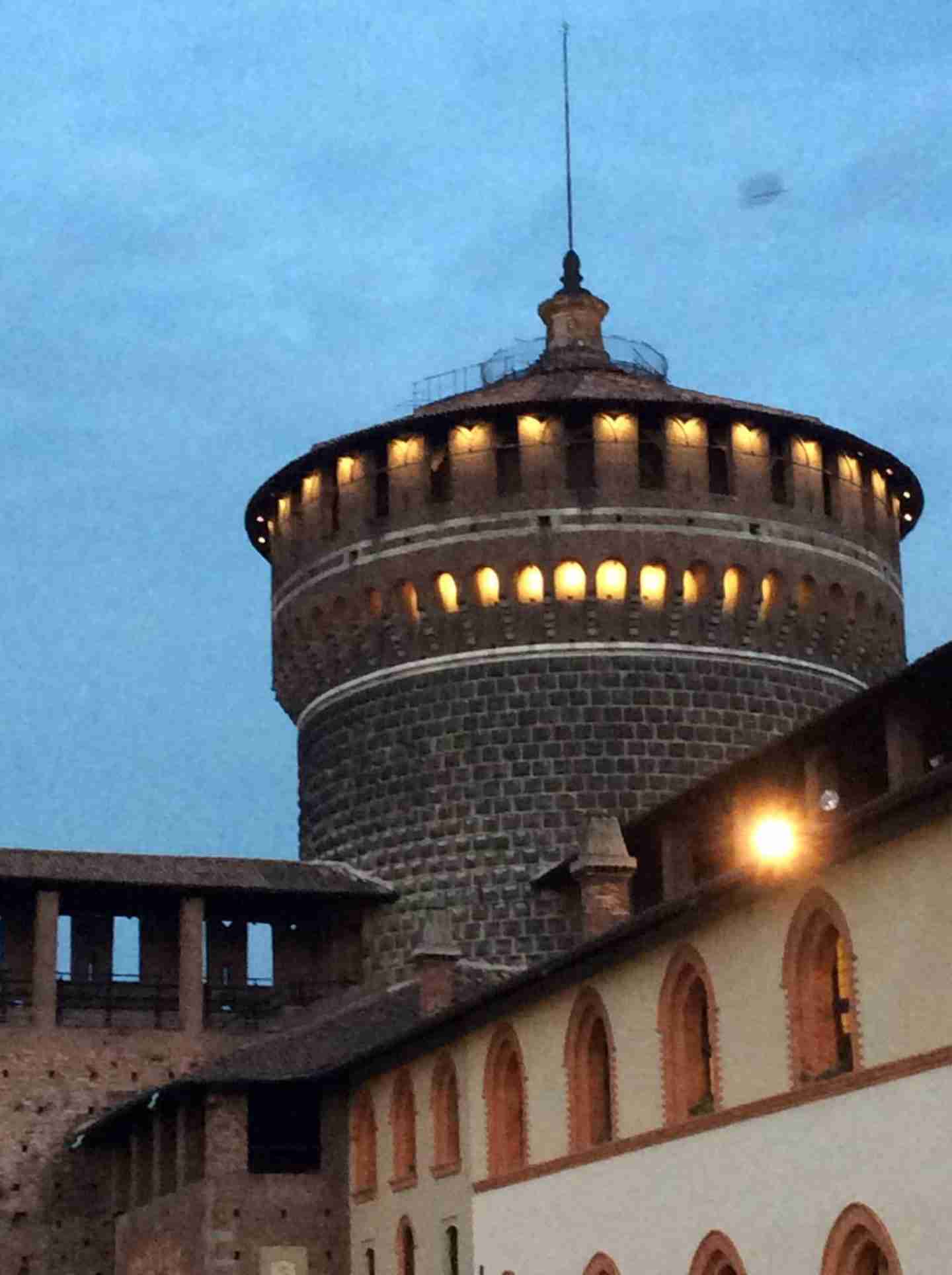 The main gate conducts to a large court surrounded by the Tower of Bona of Savoy and Rocchetta, which is an internal defensive ridotto. The Rocchetta includes the coat of arms of the Sforza family. The internal court has a portico on three sides. It has arcades constructed in the 15th century. Another court has two loggias, the smallest on the left and the bigger on the right. This one has a fresco with an elephant and for this reason, they called it Loggiato dell’Elefante. The castle in Milan is a great example of architecture because it is a combination of different styles. Of course, very well united.

I am not going to write a lot about it, because it is a modern construction. Just in front of the main gate, there is a fountain, with some water games. It is no so big, but nice, especially to take some pictures before entering the castle in Milan. I let you see my picture. 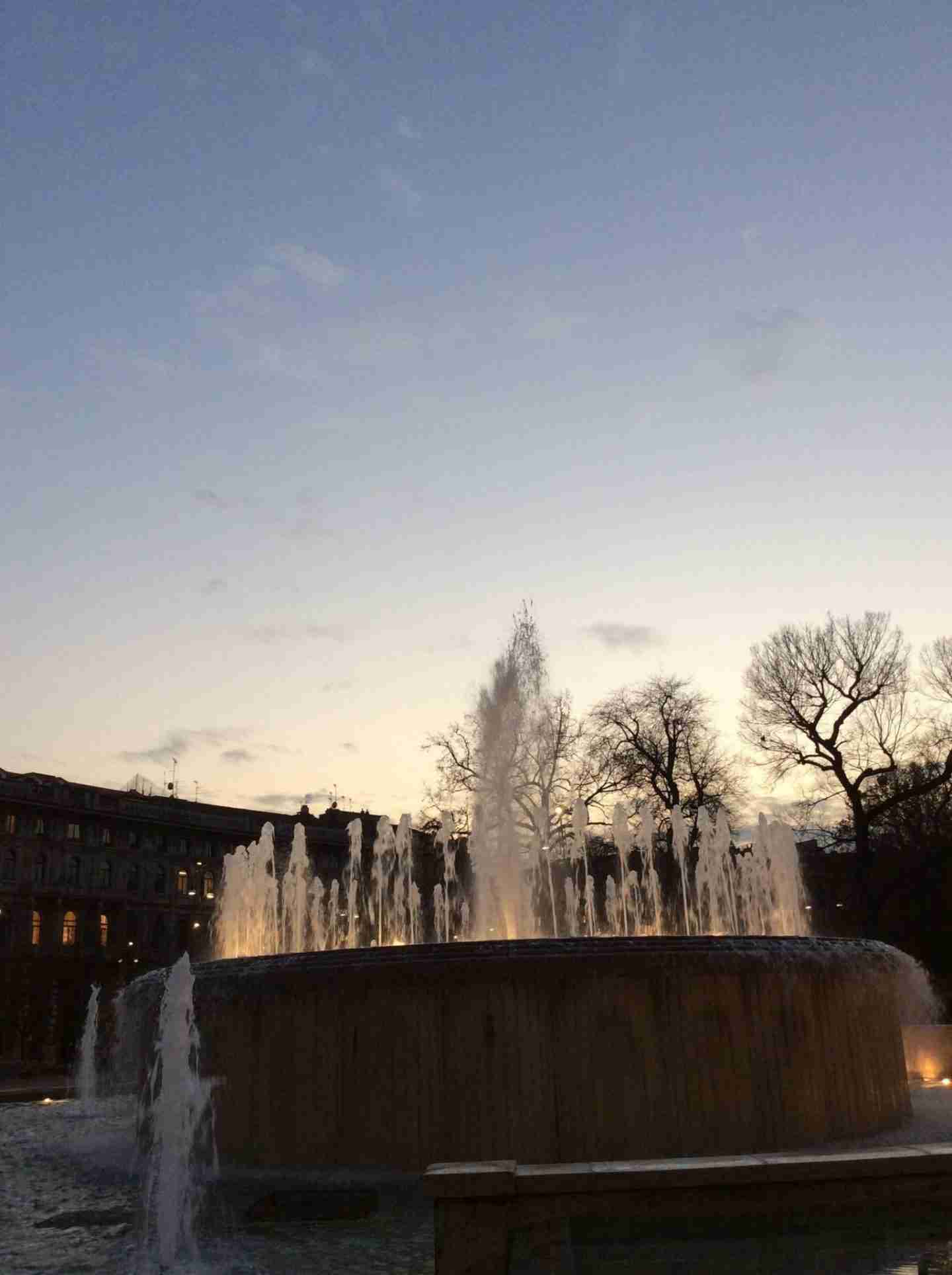 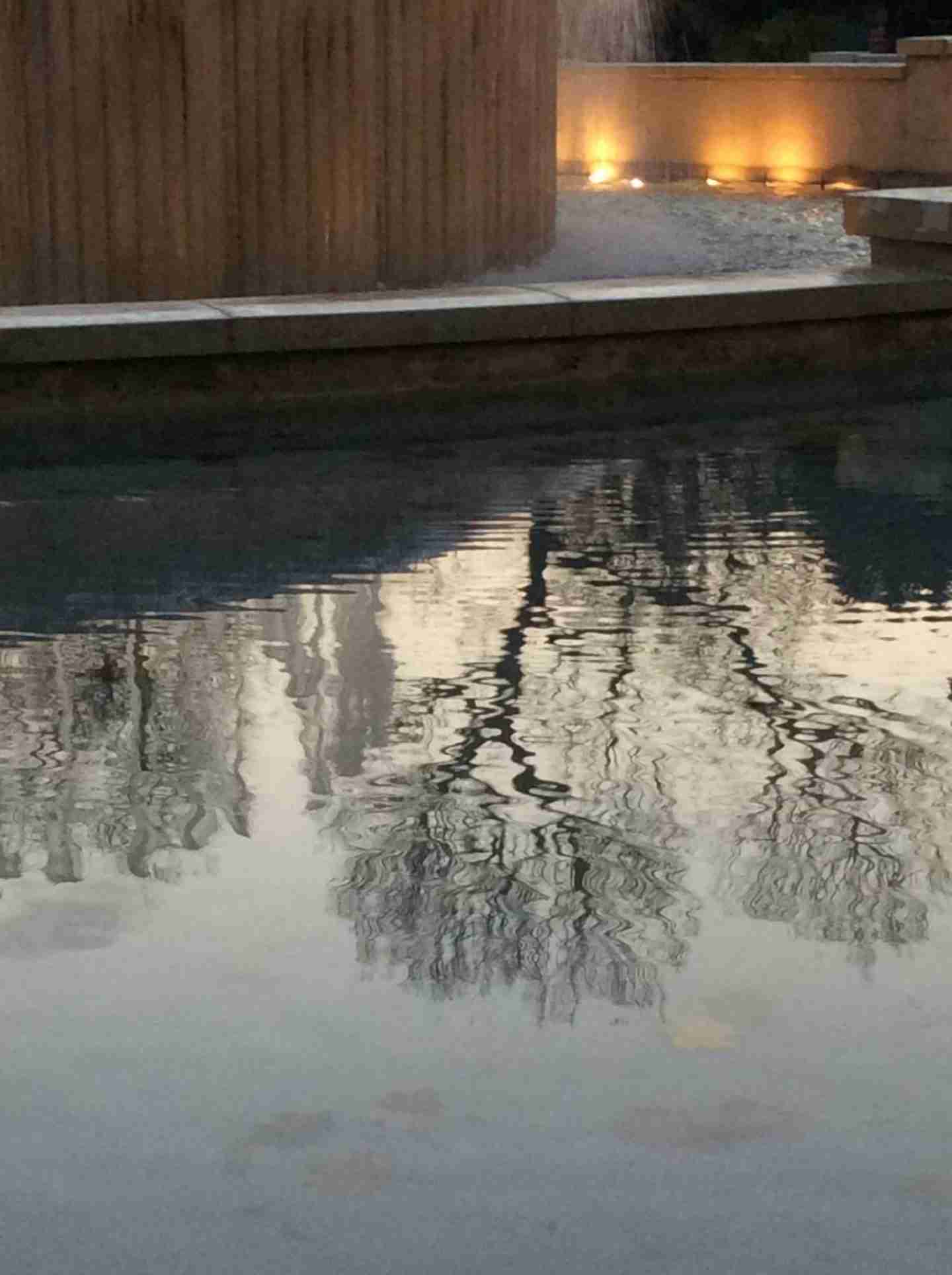 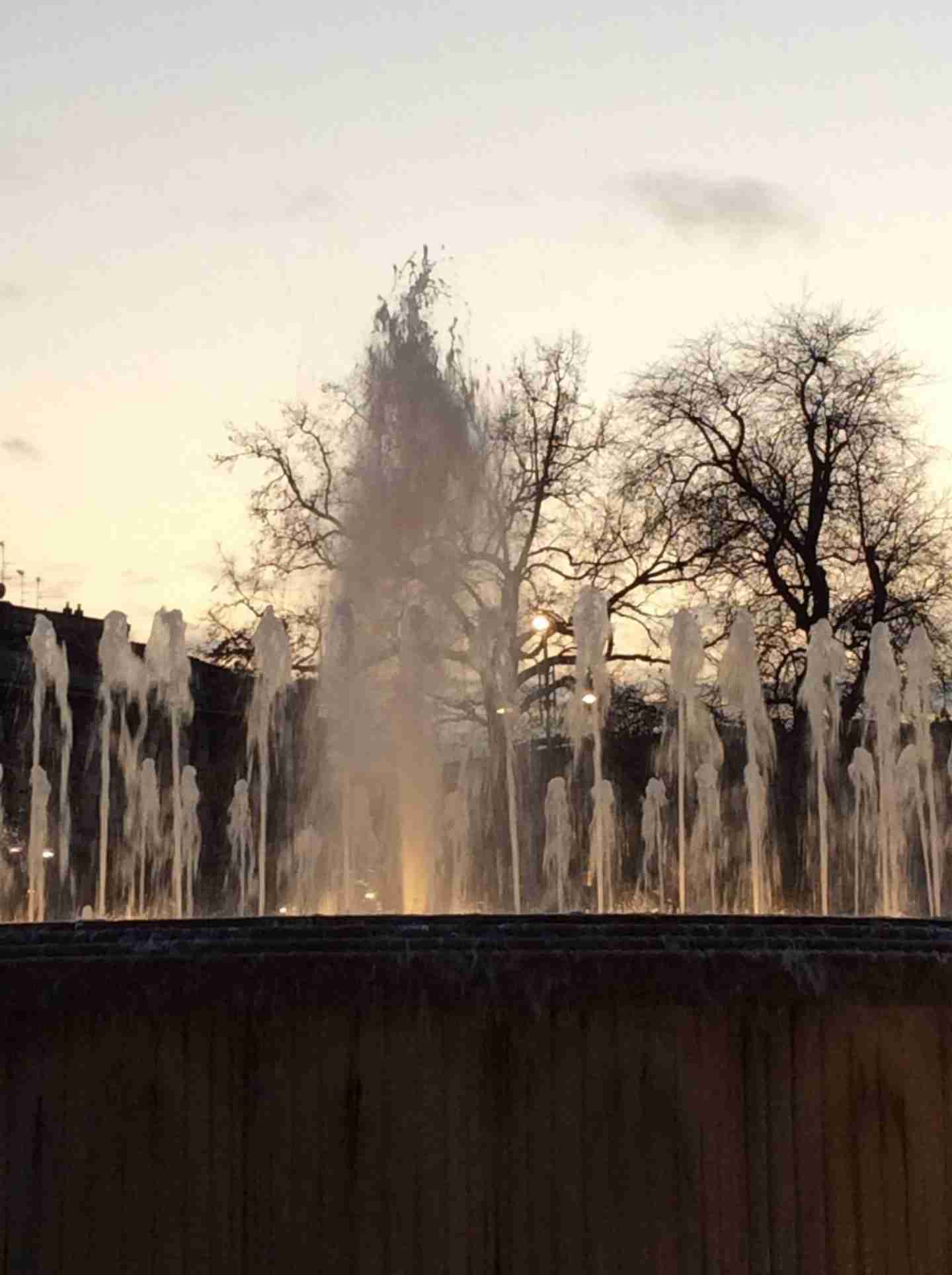 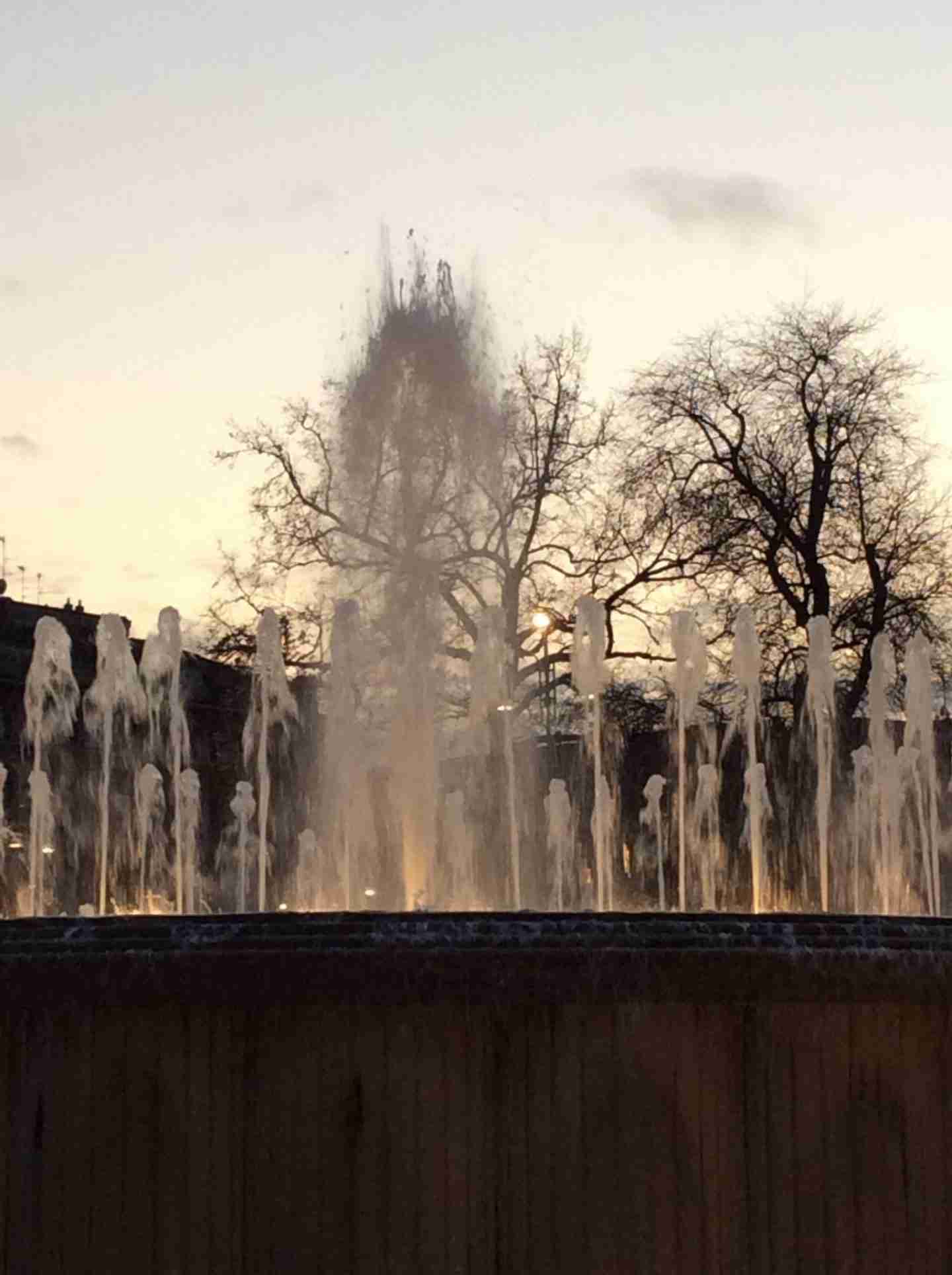 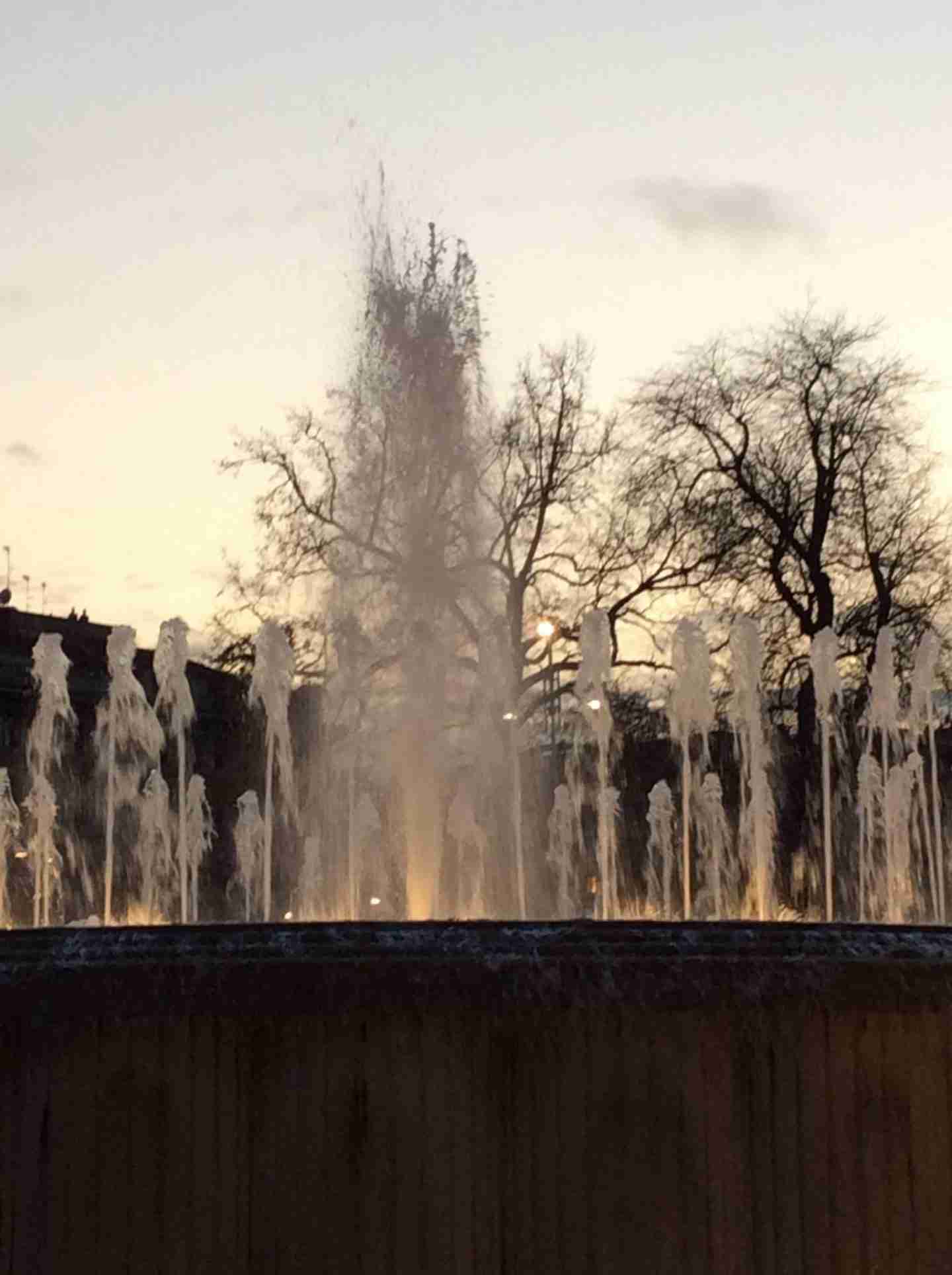 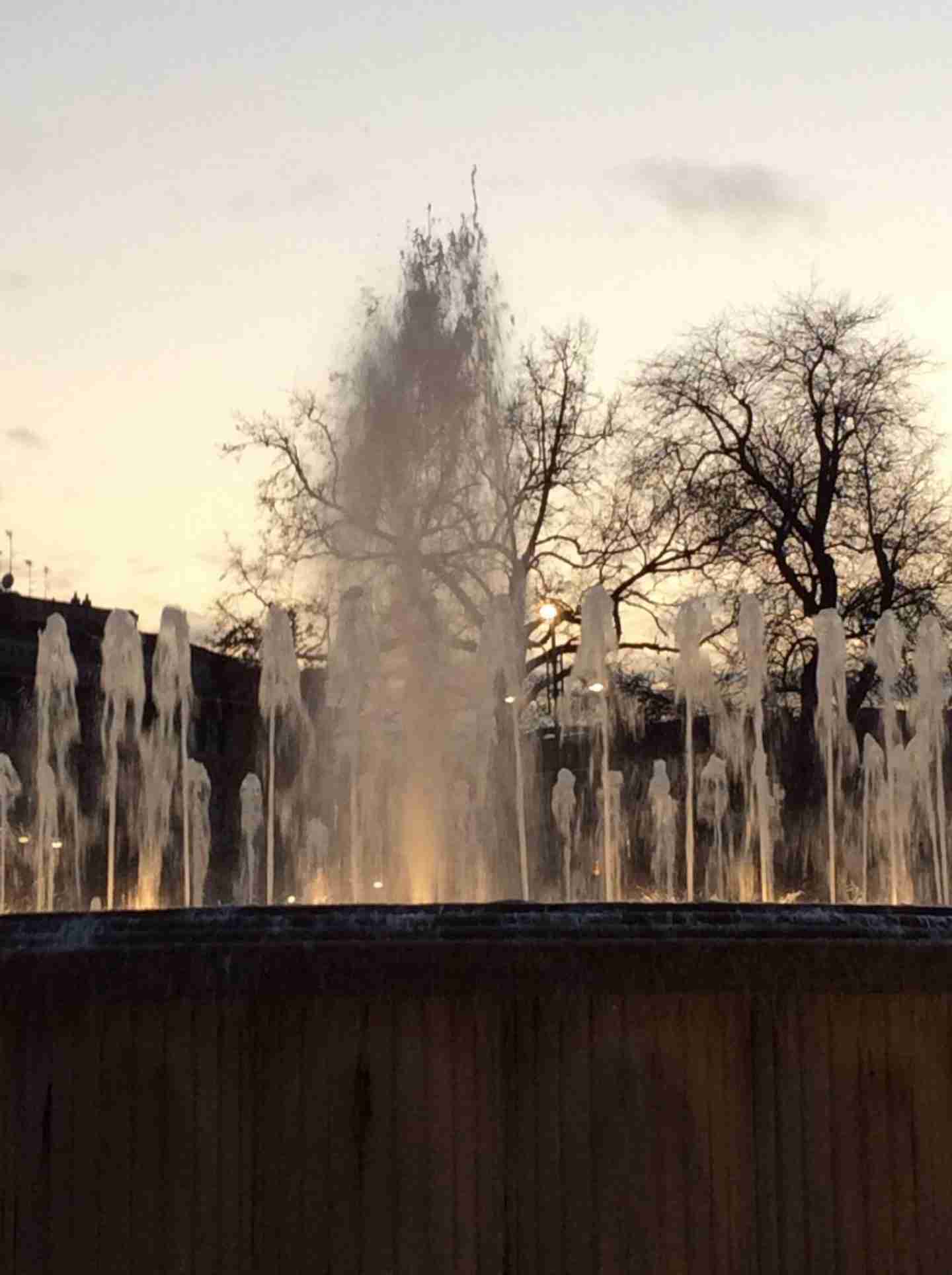 I guess you found some answers to your curiosity about the castle in Milan, but Sforza Castle is much more. You can just have a walk in the courtyards and the park, admiring the architecture, or enter the rooms. Inside it is visitable the Pinacoteca, a great collection of art that includes masterpieces signed by Mantegna, Canaletto, Tiepolo, Tintoretto, and other famous artists of the past. The Museum of Ancient Art counts a huge collection of weapons of different periods, a tapestry room, and some funerary monuments. 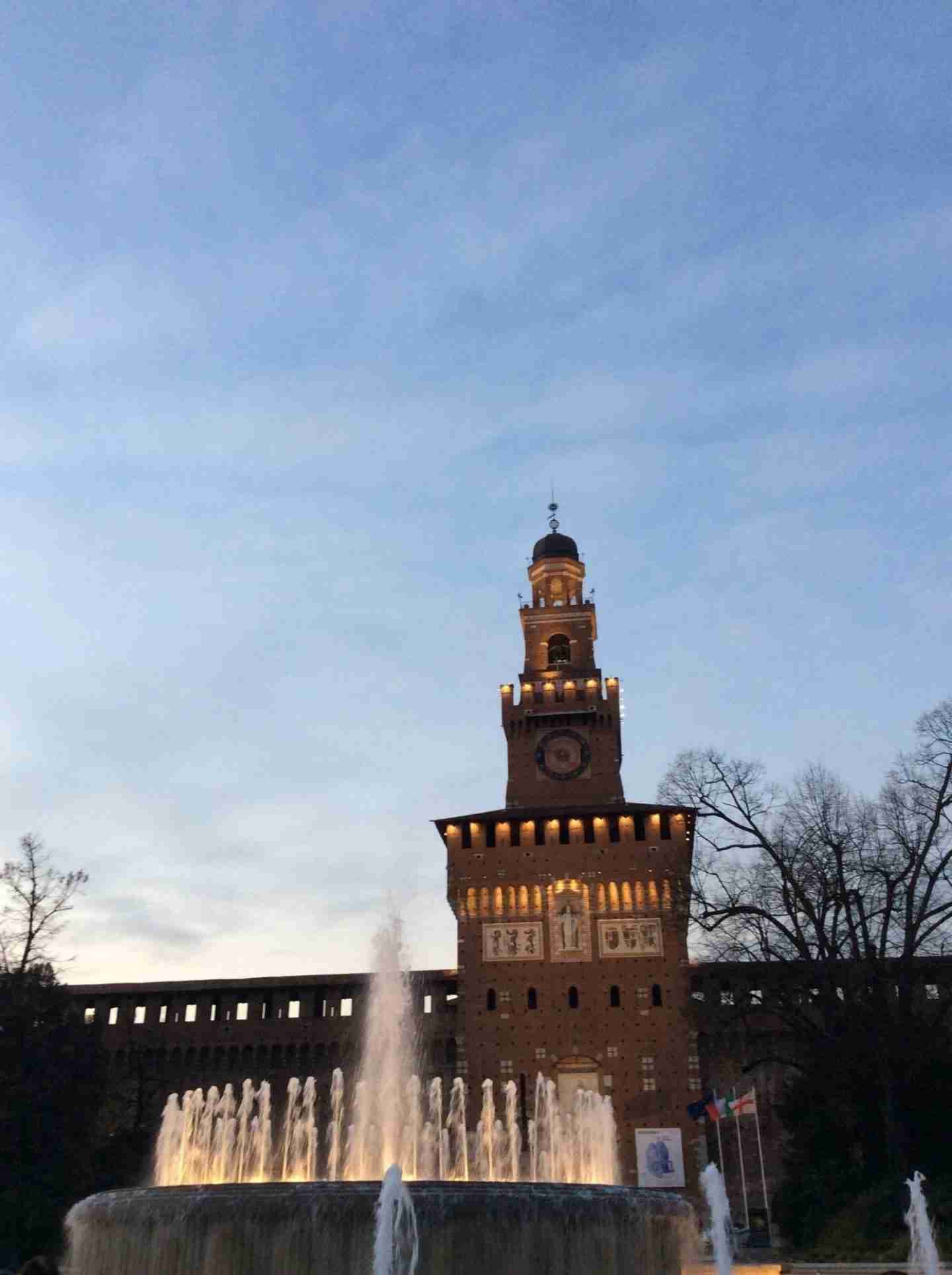 The castle in Milan counts also a Museum of Musical Instruments, a small Egyptian Museum, and collections of archeological finds, prehistoric items, applied ars, and sculptures. The most famous is the Rondanini Pietà realized by the master Michelangelo. Experts are still working in Sforza Castle to discover frescoes, paintings, and archeological finds. The last masterpiece found in the building was in 2012: a painting of Michelangelo.

During the year the Municipality and some private bodies organize events like fashion shows, concerts, and art exhibitions in the different rooms and courts of the castle in Milan. So there are a lot of reasons to visit. I recommend you to explore the place when you plan a trip to the fashion capital.